The Irish Red Cross has introduced a new style of ambulance to its fleet, the first of which will be based in West Limerick. The vehicle was launched tonight by the Mayor of Limerick City and County, Cllr. Liam Galvin at a ceremony in Newcastle West this evening.

This new ambulance design has been developed specifically to meet the needs of the first aid and ambulance service provided by the Irish Red Cross, and to provide optimum levels of safety and comfort for both patients and crew. The vehicle complies with the Europe-wide CEN standard for ambulances and the requirements of European Community Whole Vehicle Type Approval (ECWVTA) safety legislation.

Support to develop this vehicle was provided to the Irish Red Cross by the Turf Club, with funding coming from the J.P. McManus Benevolent fund. The new ambulance was built on a Peugeot Boxer van and was converted to an ambulance by Wilker Auto Conversions Ltd. of Clara, Co. Offaly. 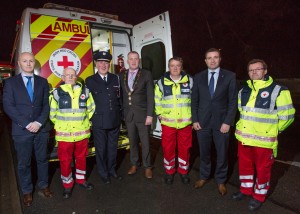 Mayor of Limerick Cllr. Liam Galvin said, “It gives me great pleasure to launch this vehicle which I am sure will be a great resource for the Irish Red Cross volunteers in West Limerick.  I have seen the support that the Irish Red Cross has given to flooded communities around the country over the recent days, we are very fortunate to have such humanitarian people living and volunteering here in our local area.”

Dr. Andrew Kelly, Area Director of Units for the Irish Red Cross in Limerick noted that “The Irish Red Cross is very grateful for the support of the Turf Club and in particular the J.P. McManus Benevolent Fund who have assisted the organisation with a range of projects over the past ten years.”

About the Irish Red Cross

With a fleet of over 140 vehicles nationwide including ambulances and minibuses, the Irish Red Cross provides first aid cover at numerous community, cultural and sporting events around the country. Cover at these events is provided by the organisation’s volunteer members who give freely of their own time, and are trained to national pre-hospital emergency care standards. In times of crisis such as the current flooding events, the Irish Red Cross is on standby to provide specialist support to communities, the emergency services and local authorities.

The vehicle featured in this article will be deployed in Limerick, where it will join a fleet of Irish Red Cross vehicles already in service. The Irish Red Cross is extremely active in Limerick City and County with over 600 members. In the last year the organisation has provided cover for over 250 cultural, sporting and community events throughout County Limerick.

Sign up to hear what we are doing in your community!